There was some discussion on the Essbase discussion board about how to build a query that would return the EPMA hierarchy in parent/child format.

Not one to refuse a challenge (I actually can't) I had a go and produced the following using Oracle SQL:

This query uses the CONNECT BY clause to build a 'parent, child' resultset based on the top level member and some input parameters. Once I've built the parent/child hierarchy based on the member IDs I then go to the member tables to look up the actual member names. There are joins on the dimension and application tables to ensure we get the correct results as a member can exist in multiple dimensions and a dimension can exist in multiple applications.

This code works in Oracle. I might update the post with some MSSQL code later (or something that works in both)


Post in the comments if you have any feedback or problems with the queries as it is possible there are strange EPMA circumstances that require special logic that I didn't encounter testing the above.

Update: Fixed/updated the bonus query and prettied the SQL slightly.
Posted by Daniel Willis at 15:04 3 comments:

Reporting on the Planning Job Console

I have recently been exploring various back end databases and tables to expose logging and processing details to an OBIEE dashboard.
I hope to blog on these various areas one at a time with the first being the Job Console for a planning application.

There isn't a whole lot of interesting information or complexity around the job console data. There is a single table in the planning schema's database called HSP_JOB_STATUS. Note that this is the specific Planning application's schema and not the Planning schema itself that the product is installed into.

The columns in HSP_JOB_STATUS are as follows (details including comments taken from Oracle schema, not mine):
Unfortunately there isn't documentation on the possible values of JOB_TYPE or RUN_STATUS however we can make some observations.

I don't think I have obtained all possible values for this column yet however the following lists those that I have:

I have made an assumption on RUN_STATUS=4 based on 2 entries in an application I used for sample data. Whatever the exact meaning of this value, it appears to be related to the total failure of the execution of a job  but not relating to something such as a syntax error or input member error which the front-end would stop a job from getting to this stage.

You can use this field to join the HSP_OBJECT table (OBJECT_ID) and obtain the username of the user who executed the job.

Sample Query 1: Show all executed jobs and their details

Here is some sample data from a system with names removed. Note that I filtered it to an admin (ProcessAdminMan) used for daily processing and that the database is blank for this job type.


Here is this report on an OBIEE Dashboard (minus a couple of columns). Again I've whited out a few names so there are a few gaps. I'd also apply conditional formatting to add some colour based on the run status.

Sample Query 2: Show the variables used for a calc execution

SELECT
ATTRIBUTE_1 AS "Calculation",
JOB_NAME AS "Variable Name",
DETAILS AS "Variable Value"
FROM HSP_JOB_STATUS
WHERE PARENT_JOB_ID = 51743;


PARENT_JOB_ID is the ID of the calculation script.

And there you have it. Hopefully that helps provide some basic understanding of behind the scenes of the Planning Job Console.
Posted by Daniel Willis at 17:38 6 comments:

Windows 8.1 has made life really painful for supporting Oracle BI products. If you did not know, Windows 8 comes with IE10 and Windows 8.1 with IE11. You cannot roll back or install an earlier version than what it comes with. This makes it very tricky when various web apps such as EPM Workspace do not support or work at all in these versions (OBIEE 11 has supported IE10 for a while now and EPM 11.1.2.3.500 supports IE10 if you're lucky enough to be there already!).

If you are stuck in this predicament (OBIEE or EPM) these are the workarounds I know about:
There was also an article on The Art of BI blog recently detailing some steps to alter the code on the server-side to work with IE10. Click here to go check that out.

Thanks to the Oracle Proactive Support blog for the heads up on OBIEE support.

Anyway, I just got excited that IE11 was finally supported in OBIEE and somehow ended up writing all of the above. Have a good weekend!


There are a couple of minor exceptions and other notes. 11.1.2.4 is meant to properly support IE11. Check out the KB article for full details.

I have been spending a lot of time with OBIEE and Essbase lately (quite often much more time than should have been necessary!) and so my first blog in much too long is about my latest hurdle. It seems that OBIEE is full of hurdles and sneaky workarounds (and also some amazing customisation/extension opportunities using third party visualisations). Using Essbase and OBIEE together probably exponentially increases the amount of hurdles but I am still enjoying the product.

I recently wanted to create a table with measures in the rows and years and organisations in the columns. I also wanted to have a increase % column added.

This seemed easy enough to do using a calculated item on the Fiscal Year column in the table.

It quickly became apparent however that the formatting options are very limited for this new column. Basically you only get style formatting and cannot change the number format and therefore you cannot choose to display the output as a percentage. 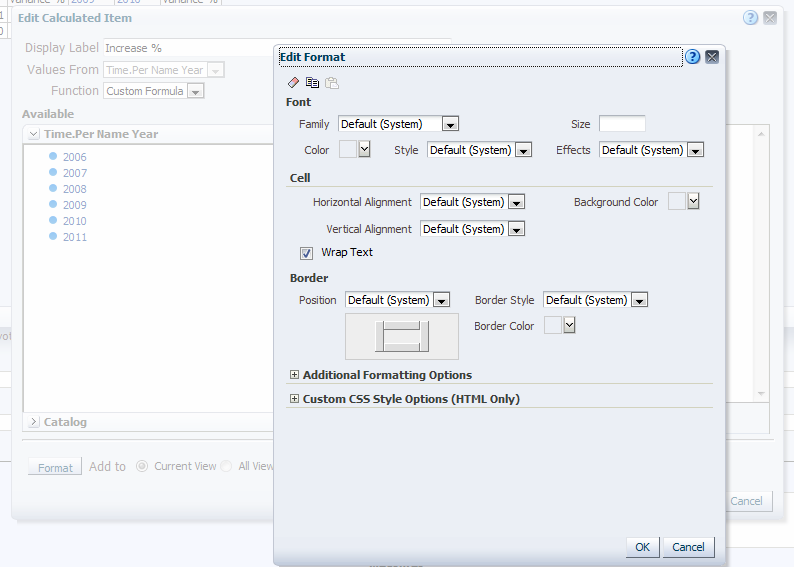 A quick thinker might instantly just try to concatenate a percentage sign onto the end of the number but would be even more quickly disappointed when the editor only allows numerical calculations/output.

The solution is not particularly convoluted thankfully. All you need to do is add a conditional format onto each of your measure fields with the condition that when the column ('Per Name Year') is null, then apply the percentage data format. So the steps are:
Notice that the second measure is still not formatted (# of Orders). You will need to repeat the conditional formatting on every measure.

The final result will be:

There you have it. Hopefully that gets someone out of a bind. I would be keen to hear any other options people use, especially if they are better! I'm sure another option would be to modify the XML which would work for different formatting on multiple calculated columns.